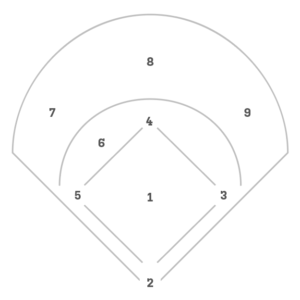 The Scoresheet
#  —  Player Jersey Number
POS  —  Player Position Number
AB  —  At Bats —  Sacrifices and walks do not count toward At Bats
R  —  Runs —  Number of times a player crosses the plate to score a run
H  —  Hits —  Fielder’s Choice and Errors do not count toward hits
RBI  —  Runs Batted In —  When the result of a batter’s plate appearance results in a run being scored
IP —  Innings Pitched —  ie: 1.1 = one complete inning pitched and number of outs made in partial inning
ER —  Earned Runs —  Any runs scored against a pitcher, not the result of a passed ball or error
BF  —  Batters Faced —  Number of batters a pitcher faced
TP  —  Total Pitches —  Total number of pitches thrown by a pitcher in one outing

Ways To Get Out
(# REFERS TO PLAYER POSITION)

L # —  Line Drive —  ie: L6 = line drive out catch made by shortstop
F # —  Fly Ball —  ie: F8 = fly out catch made by centre field
# U —  Unassisted Play —  ie: 3U = first base was the only player who touched the ball and made the out
# DP —  Double Play —  Two players ruled out within the same play
# TP —  Triple Play —  Three players ruled out within the same play
K —  Strikeout (Swinging) —  Strike three was a swing and a miss
ꓘ —  Strikeout Looking —  Strike three was a called strike by the umpire
CS —  Caught Stealing —  Base runner tagged out while stealing
SAC —  Sacrifice —  A player sacrifices themselves (bunt or fly ball), advancing a teammate to score
IFR —  Infield Fly Rule —  Fair fly ball with runners on at least 1st and 2nd with fewer than two outs.
Umpire will call batter out if fair.

HOW TO SCORE A GAME

Everyone who scores a game does so a little differently – use what works for you and only what enhances your experience – this is your scorecard!

It’s a good idea to do this before the start of the game so you are ready to go at first pitch. The lineup will generally be announced an hour or two before the game and are easily found online (a team’s Twitter page is usually a good start). Fill out the position number and player name section of your scorecard in the order the players are listed in the lineup using only the white spaces (save the grey for substitutions). Remember to use the position number on your scorecard as lineups will usually be given with the letter abbreviation. In the American League, the pitcher doesn’t bat so they will be listed last – add them to the pitching section of your card. Fill in players’ jersey numbers if you know them, or fill in as the game goes on!

When a batter steps up to the plate, things get interesting and you can personalize your scoring experience! Each at-bat exists in one square of your card starting with the first batter in the top-left square. The diamond in the square is representative of the baselines and bases. Use your abbreviation cheatsheet to record plays. Record hits by darkening the lines on your diamond that the player advances with the play abbreviation. Generally plays that result in an ‘out’ (or a Home Run!) are marked in the middle of the diamond as these are ‘complete’ and base advancements are recorded on the outside of the diamond as those players are in-play. 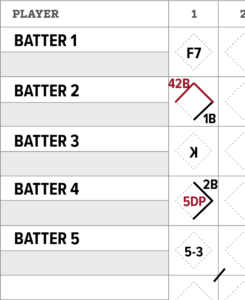 When a run is scored, darken the final baseline. At the end of the inning, mark the last batter, count closed diamonds as runs and tally hits at the bottom of the row. Record the number of runs for the inning in the runt racker along the side of your card.

Be sure to keep track of pitching changes, which can occur between innings or mid-inning and more often than pinch-runners or hitters. Mark a vertical line at the bottom of the at-bat box when a pitching change is made. If a sub comes in as pinch-runner or hitter, record their name and number in the grey box below the player they are taking over for. Mark a horizontal line along the edge of the at-bat between the innings when this change is made.

If you’d like, you can record trajectory (where the ball went) of a hit with a diagonal line across the diamond from the bottom corner. It can also be helpful to record ‘outs’ – choose a corner of your square to mark with a 1 on the first out and record a 2 in the same spot on the next out. Some scorekeepers also find it helpful to track balls and strikes with tick marks or small circles (the bottom corners of your squares are a good spot for this, balls on left and strikes on the right). Remember to move into the next column in the 2nd inning!

Record the date, start time, attendance and location of the game, plus any other elements or notes that interest you. Enjoying a beer with the game? Note the name, style, brewery and any tasting notes! Scribble notes or doodle your snacks in the margins – make it yours and have fun!