“BREWERY TURNING INTO BIG NOISE IN NEIGHBOURHOOD” – A RESPONSE 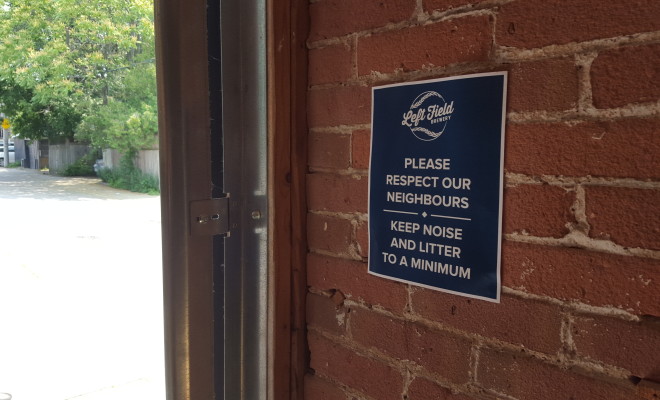 This morning, Metro news published this article regarding this item that has now found its way onto the agenda for Wednesday’s City Council meeting.

We wanted to express how truly disappointed we are that this has become both a news item and a City Council agenda item. Now that the story has been publicized, we feel it’s important to share the full background in order to provide some much needed context. Disclaimer: it’s a long one folks, so grab a cold one and settle in.

Our Brewery, Tap Room and Bottle Shop is situated on a small industrial laneway, nestled between the residential back laneway parking for residents of Ivy Avenue, about 30 feet to the south of our front door and train tracks to the immediate north of our building. The building has existed for more than 100 years and has always been an industrial space used for manufacturing. At one point, condo development re-zoning applications were denied for the space and council moved to preserve the light industrial/employment use of the laneway. The building sat vacant for years after that decision and before we moved in. As a result, the Office of Economic Development and Culture touts our investment in and use of the space as a success story. 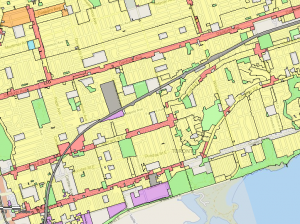 See the tiny purple triangle in the centre of this zoning map? That’s us! Purple properties are zoned industrial, yellow is residential. As you can see, there are very few examples of industrial and residential zoning smushed together quite so closely in the city. That’s just one of the reasons we fell in love with our building on Wagstaff when we stumbled across it. It’s accessible safely by foot, stroller and bike, it’s close to our own home, and it had the potential to become a neighbourhood hub – something that can be challenging for brewery Tap Rooms that are situated in suburban industrial parks. It also doesn’t come without its share of unique challenges.

Ahead of announcing our plans to build a brewery, we recognized that not necessarily everyone would be as excited as us to have a brewery set up shop right across from their backyards. And so with that in mind, we visited every home on Ivy Avenue to discuss our plans, answer any question and both hear and address any concerns before announcing our brewery build project publicly.

Our brewery Tap Room and Bottle Shop opened on a Part Time basis in March for Pop-Up Shops on the weekends and since May 1st, has been officially open every day from 12 – 9 p.m. While our AGCO-issued Retail Store Authorization license allows us to keep our Bottle Shop Open between 11am – 11pm each day, we’ve opted to, at least for now, only be open from 12 – 9pm as a courtesy to our neighbours and to eliminate evening noise. Our By-The-Glass license allows us to serve beers brewed on site between 11am– 9pm in a maximum 12oz serving. Guests must be finished their beverages and out of the building by 9:45 at the latest. We only under very rare circumstances host private Special Occasion Permit (SOP) events, which tend to extend much later into the evening. We’ve hosted one to date in support of our own University’s Alumni Association.

Because we don’t serve food, our busiest peaks are Saturday and Sunday afternoons between lunch and dinnertime. We are a family-friendly, dog-friendly Tap Room. Most customers stop in for a beer or two and head home with a few bottles or cans from the shop, puppies and strollers in tow.

After a couple of weekends of Pop-Up Shops, a few immediate neighbours raised concerns that we were operating illegally as a bar and that we were creating too much noise and bringing too much traffic to the previously abandoned, sketchy but quiet laneway.

One of our objectives is to act in a way that would earn us a reputation for being a good neighbour. Before we opened, we designed, printed, laminated and hand delivered No Parking signs to every home that backs onto Wagstaff, anticipating that customers might accidentally park in one of our neighbours’ driveways. We aren’t perfect, but the point here is that we are constantly anticipating potential issues and trying to address them before they occur.

As you can imagine, the complaints that started coming in from neighbours both concerned us and took us by surprise. We invited the community and our city Councillor in for a meeting to discuss the traffic and noise in greater detail and to try to collectively find solutions. We used the meeting as an opportunity to explain the important distinctions between our Tap Room and a Bar. In the tap room, we’re only able to serve and sell our own beer, we cannot serve wine or spirits, our maximum serving size is 12oz and we must close at 9pm every night. Most importantly, we used the meeting as an opportunity to hear concerns and brainstorm solutions.

It was suggested that we keep our large garage door closed during busier times to prevent sound of voices and laughter from carrying out into the laneway. We expressed that this would not be a feasible or desirable solution in the warmer months as breweries are generally very hot and that it would put the comfort and safety of our guests and staff at risk. We agreed to look for alternate and creative ways to manage noise and agreed to collectively track data regarding noise in a log for 2 weeks and to re-convene and compile our findings. The great thing about this action item was that our next conversations would be fact-based and not feeling-based. We invested in a decibel meter and diligently tracked sound levels inside and out, number of patrons, complaints and anything else that we could possibly think of recording on the hour, every hour for weeks.

With the help of the noise meter, we learned that the sound levels in the laneway were actually quite reasonable. At our busiest peaks the decibels registered lower than light mid-day traffic on Greenwood Ave. Loud peaks were created in our decibel tracking when birds chirped loudly, cars drove by or when a dog barked. Nothing more than common, everyday city noise. We weren’t pounding sheet metal or jackhammering or playing amplified music or creating any sound that would be deemed unreasonable under any noise by-laws, especially not for an industrial zoned building. We are most certainly noisier than the previously abandoned building and we most definitely make more noise on Saturdays and Sundays than the previous occupant – a Monday – Friday, 9-5pm roofing manufacturer, and so we can absolutely understand and appreciate that the change in the laneway would be an adjustment for the residents. Most importantly, all noise ends by 9pm sharp every evening. Inspections by 55 Division, the Alcohol and Gaming Commission and Municipal Licensing and Standards to investigate noise complaints have taken place and we’ve received nothing but positive feedback from these authorities regarding their visits.

The most recent complaint was lodged this past Saturday at 1:30pm. We had four patrons in the Tap Room and none of them were speaking to each other. We were brewing and so the garage door was fully open to promote air circulation. Our brewers were listening to music at the back of the building, about 60 feet from our sidewalk and 90 feet from our neighbours’ property lines, at a very normal volume level that would allow regular conversation to be heard. A neighbour called and asked that we either close the door or turn off the music. Even though we felt that the request was completely unreasonable, we turned off the music as a courtesy. It was 84 degrees Farenheit in Tap Room at the time and so closing the door would not have been an option. Other complaints have been lodged as a result of a single loud talker. On one occasion, a neighbour asked us to close the garage door because of the noise and there were precisely two sleeping babies inside the brewery at the very same time.

Requests to reconvene with the neighbours and Councillor to compile our sound data have gone unanswered. We were told that certain neighbours found the concept of logging noise to be unproductive and so we wouldn’t be meeting again as a group.

Since the original meeting we’ve taken the following actions to help mitigate the disturbance:

– A cigarette receptacle has been installed on the outside of the building to encourage guests to smoke on our side of the street, keeping noise further away from our neighbours’ yards

We certainly can’t pretend that Wagstaff isn’t a busier, more vibrant laneway than it would have been even a short year ago. We’ve gone from just two employees on January 1st of this year to 12 jobs today. These are good manufacturing jobs, none of which are at the minimum wage. All full time Left Field employees have benefits. We are operating legally and responsibly. The vast majority of Ivy Avenue residents have not only been great supporters of our new business, they’ve also been some of our very best customers and many have become friends over the few short months that we’ve been open. We are constantly overwhelmed and are extremely grateful for the way the community has embraced and supported our business. The situation has rather unfortunately escalated to become an emotional dispute rather than fact-based and we are disappointed that we weren’t able to find a way to diffuse it before it made page 4 news in today’s commuter paper. We are genuinely committed to being a good neighbour and we would like nothing more than to find a solution to any reasonable concerns that any of our neighbours may have.

If you’d like to see/hear what all the fuss is about, we invite you come in and check it out for yourself (just not all at once).